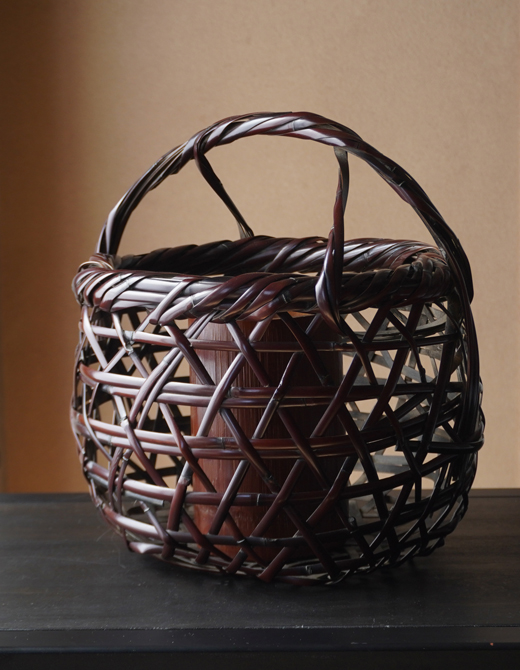 Sou (草）style basket woven with finest houbichiku, smoked dwarf bamboo (nemagaridake) with less scratches and soot. Rokansai made several similar baskets but this is one of the biggest.

Iizuka Rokansai (1890-1958)
Born in Tochigi prefecture. Sixth son of Iizuka HosaiⅠ. Iizuka family moved to Tokyo in 1910. He became independent when he was 26 years old in 1916 by being encouraged and named Rokansai by seal engraver, Ashino Nanzan. He pioneered in the field of modern bamboo crafts. Began exhibiting works in the Teiten exhibitions in 1931 and was awarded a top prize in 1932. Came up with the idea of “Shin(真, formal), Gyo(行, semi-formal), So(草, casual) and advocated this through his life, after WW Ⅱ, became a member off the Nitten exhibitions judging committee and councilor and later became the director of the Nihon Kogeikai group. He raised the bamboo craft higher to art that was considered lower than other crafts, influenced a large number of younger bamboo crafts artists.

真行草 idea is applied to many Japanese cultures such as calligraphy mainly, tea, courtesy and so on.